Verity Commercial > Brokerage > The Shifting Balance Between Industrial and Retail

The Shifting Balance Between Industrial and Retail 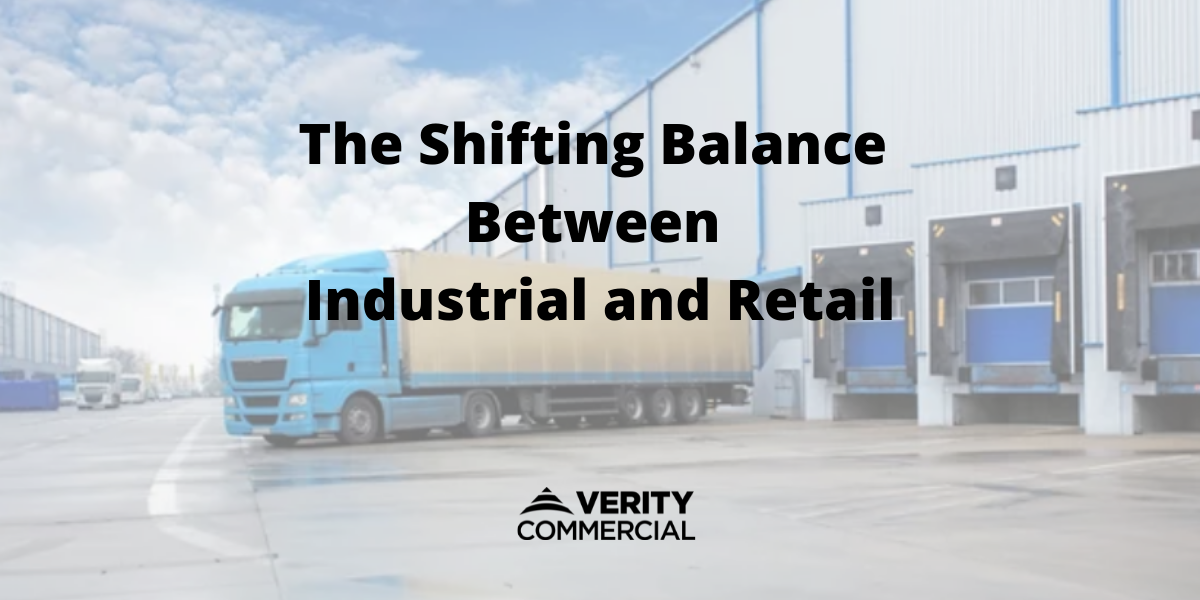 The retail sector is changing. According to PwC’s latest edition of Emerging Trends in Real Estate, the broad net the accounting firm spreads over the major commercial real estate markets annually.

The short-form rationale behind this proclamation is that consumers are looking increasingly for flexibility and convenience, and retailers, as a result, have to redefine their delivery methods to “meet consumers where they want to be.” The implications of this redefinition are vast, and not just for consumers. The implications are huge particularly for investors in both retail and industrial assets. But the details are subtle and deserve a closer look.

Note that we said “redefinition” and not revolution. Many of the redefining trends have been in the works long before last year’s pandemic-driven upheavals. Nevertheless, the trend got a major boost last year, and according to Digital Commerce 360, consumers dropped more than $790 billion in online sales last year . . . and Amazon alone took credit for a third of that.

The mega-retailer has been scarfing class A warehouse/distribution space throughout the country for years now, often relegating other industrial space-takers to B facilities. (Ironically, given the overall heat of the warehouse/distribution market, those B spaces are often trading for A prices.) But while the phenomenon is called the Amazon effect, it’s not just Amazon. It’s Walmart and Target and all the big boxes that command a massive international following of consumers who can more easily open their devices to shop than walk into a store.

We should stress here that we are not tolling the death knell for retail. Not in the slightest. Rather, we’re celebrating those retailers who have read the tea leaves and expanded their virtual footprint to include online sales as part of their strategy.

In fact, all of the Top 10 ecommerce retailers also operate brick-and mortar stores, and while the list includes such tech-forward names as Apple and Amazon, it also includes the likes of Macy’s and the Home Depot. In addition, Verity’s own in-house experts report that they are seeing savvy brands approaching and even exceeding pre-pandemic sales levels. According to Retaildive.com, “nearly one in three Americans now see no difference in the experience between buying online from a DTC [direct to consumer] company versus a traditional retailer.” Bravo, savvy retailers!

Not surprisingly, the industrial sector is enjoying an unprecedented spotlight as a result. According to CNBC Business News, “the US will need 1 billion square feet of new industrial space by 2025 to keep up with demand. That estimate doesn’t account for all the warehouses that have already hit the market in the last year.”

Also fueling the percolating warehouse/distribution market are ghost kitchens and groceries, trends that clearly proved their bones in the depths of the recession. In August of this year, Kroger– one of the Top 10–unveiled plans to open a test Ghost in L.A. this fall, with more rollouts expected thereafter. There are also a rising number of fast-delivery models such as Gorilla, a Berlin-based brand that has gone global with its guarantee of grocery deliveries in 10 minutes. Walmart as well is dipping its massive toe into the ghost kitchen concept. CNN projects that ghost kitchens will be a $1 trillion global market by the end of this decade.

Little wonder then that “Emerging Trends” reports that selective developers and investors put industrial/distribution as “leading the pack” among investment prospects. But again, the sector has done so for “nine straight years,” proving that the pandemic merely underscored forces already at play.

However, even hot markets bear their own downside. For the industrial sector, it comes in the form of the current strain on asset availability, the still-high costs of construction materials and the ongoing lag in the supply chain, which not only threatens to hamper your holiday shopping but puts a severe pinch on the creation of new industrial facilities in an environment where speed to market rules.

To the extent that these are the direct result of last year’s pandemic-driven upheaval would imply that the resolution of those ills is only a matter of time. For that, we can only wait and watch. But those trends that are pre-pandemic imply a major shift in the yin and yang of industrial and retail properties that will define the future for both sectors.

There will be change, permanent change. And both sectors stand to gain at the hands of market participants with a clear, forward-thinking strategy.